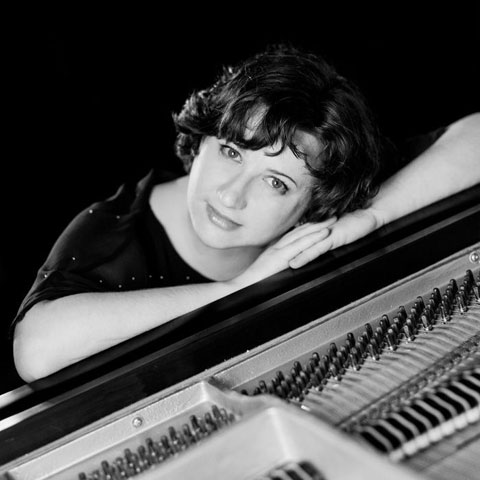 In September 2009 Sofya Gulyak was awarded the 1st prize and the Princess Mary Gold Medal at the Sixteenth Leeds International Piano Competition – the first woman in the history of the competition to achieve this distinction. Since then she has appeared all over the world to great acclaim.

Her recital programmes are frequently reviewed in superlatives, and her concerto appearances with major orchestras are noted in glowing terms by the world’s music press. Sofya has been praised for her "tremendous precision and colouration...exquisite soft playing ...with delicacy" and described as a “Rach star"(Washington Post).

Sofya Gulyak’s recording of Russian piano music (Medtner, Rachmaninoff, Prokofiev) was released on Champs Hill Records in 2013 and received a 5 stars review in Diapason magazine (“What a pleasure to hear the piano blossoming and projecting in the most vivid of ways when played by Sofya Gulyak. The singing sound alongside dazzling and powerful execution distinguishes an outstanding natural pianist”) and praising reviews in Gramophone (“This is a stunning debut album…”) and Guardian magazines (“Sofya Gulyak is a fearless pianist, never afraid to scale the most technically demanding heights of the repertoire and equally proud to wear her heart on her sleeve”). Her CD with Brahms music was released on Piano Classics in the spring of 2015 and got glowing reviews from American Record Guide ("The Handel Variations is among the top contenders on record. From the very first notes she takes charge and envelops us in a thrilling sequence of variations that will send goose bumps to susceptible listeners. Not only does she perform with arresting contrast and lovely, soft floating tone. She keeps you on the edge of your seat, as the music presses ever forward. Sometimes I was reminded of the young Argerich.." and Fanfare magazine (" Her musicality is beautifully attuned to the spirit of Brahms...I must praise Kazan-born Russain pianist Sofya Gulyak, whose impressive reading places a stronger emphasis than Perahia's in the continuity of the variations... She is a natural Brahmsian whatever his moods."). Her last CD with the Chaconnes for Piano was released by Champs Hill Records in 2017.

Sofya Gulyak is a native of Kazan (Russia) where she studied in a Special Music College under Nailya Khakimova, and then in Kazan State Conservatoire under Professor Elfiya Burnasheva. After that she continued her studies at the Piano Academy "Incontri coi Maestri" (Imola, Italy) with Boris Petrushansky and at the Royal College of Music in London with Vanessa Latarche.

Sofya Gulyak attended as a jury member the International Piano Competitions in Italy, Serbia, France, Greece, USA, and was invited to teach master classes in China, Italy, Australia, New Zealand, Philippines, Hong Kong, Mexico, USA, and Germany. She is presently a professor of the piano at the Royal College of Muisc in London.

Her playing has been broadcast on radio and TV in Russia, Poland, France, Italy, Germany, USA, Finland, Denmark, Serbia, New Zealand, Brazil, Mexico, and the United Kingdom (BBC 3 and BBC 4).